The local cuisine, as well as the entire prefecture, is intensely multicultural. The Greek diaspora is concentrated on the table with all its features! In the homes, every season, traditional flavors and aromas beautify the atmosphere. The prefecture of Kilkis is justly proud of its rich culinary activity. Here, each family prepares pickles throughout the year, while local and delicious original recipes give their taste to every festive day of the year.

King of all ... the Pontian cuisine! Here, the famous pontian cheeses and pasta "Ragian" are produced in the village of Vathi, in an amazing, visitable production facility. Fine dairies, such as the cheese Doirani, dairies from Koukakis, Lykas and Kolios are also produced in this region. Parparas produces homemade pickles. Goumenissa is the center of the wine production with OPAP wines from the varieties Ksinomavro and Negoska. Wineries made with care, like Boutari and Aidarini, small wine museums, real gems, such as the Eftichides and Tatsis, traditional cauldrons like Archontakia, exceptional units with organically grown vines like Akrothea winery, but also new, modern and well-equipped ones like Hatzivaritis, are all waiting to guide you and accompany you to the wine roads, with aromas of grappa and tsipouro.

In this region you will try traditional dishes and sweet preserves in Filiria, in the home of Mr. Alekos, in Gerakona, in the corner of Mr. Vassilis with the genuine honey and in Fanos, in the traditional oven of Costas you will taste homemade bread and pasta made from traditional organic cultivation and stone-crushed cereals. From the taverns in Kroussia to the restaurants in Kilkis and from Livadia in Paiko to the scenic Kastaneri and the lush Kotza Ntere, exquisite meats from local free-range animals promise you unforgettable culinary delights. Fresh fish at Doirani, cooked in every way, supplements the list for the lovers of "Well Living". 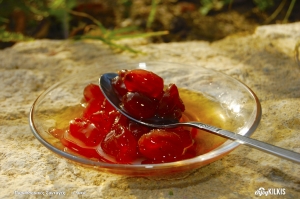